How I became rooted in soil science

I am soil scientist living in Manhattan, Kansas, where I am an assistant professor of soil science in the Department of Agronomy at Kansas State University. I grew up on a small family farm in northwest Iowa where I gained an appreciation for the great outdoors, agriculture, and the natural world. My interest in wetlands started as a teenager when I went on my first duck hunting adventure with my older brother. Since it was my first time I didn’t have any waders so I attempted to stay afloat while hunting in the middle of the wetland by walking on knocked-over cattails. This eventually lead to me getting stuck waste-deep in muck (highly decomposed organic material that accumulates in  wetlands) with no waders on. This would irritate some people, but it actually made me quite curious about how such a soil could form in a wetland ecosystem like that. From then on I found wetlands incredibly interesting, so I approached college with the goal of creating a career around wetlands.

I entered the environmental science degree program at Iowa State University. There some incredibly enthusiastic professors showed me how interesting soils can be, so I enrolled in every soil science class that I could. My I felt that my introductory soil science professor had my dream job – preaching the complexities of soil science, taking students on cool field trips, conducting research on topics that directly impact the environment and agricultural economy around me. From then on, becoming a university professor teaching soil science was my ultimate career goal. I finished my bachelor of science in environmental science in 2008, after-which I entered the soil science program at NC State where my research is a blend of my two academic interests – soils and wetlands.

I work under Dr. Vepraskas researching phosphorus release from wetlands restored from agricultural land. I earned my master of science degree in soil science from NC State in 2010 with the thesis topic of “Phosphorus release mechanisms in rhizospheres of wetland trees”. I completed my doctoral program in the same discipline, also at NC State with the dissertation topic of “Dynamics of P release from wetlands restored on agricultural land”.

I continued my career as a postdoctoral researcher at the University of Washington. There I conducted research on quantifying methane oxidation in the rhizospheres of vascular wetland plants in thermokarst bogs in the interior of Alaska.

In 2015 I started my dream job of becoming a university professor teaching soil science. I joined the Kansas State University Department of Agronomy as an assistant professor of soil science. My appointment is a teaching/research appointment. I teach an introductory soil science class (~120 students) each semester, an upper-level soil and water conservation class each fall, and a graduate level course on root and rhizosphere analysis every other spring. For my research I continue to follow my academic interest in soil-root interactions – both in agricultural and natural settings. 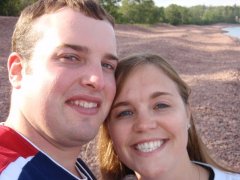 I am married to my beautiful bride, Stacy. We have a toddler who I’ll refer to as BAM. We also have two mutts, Brutus and Tully. In my free time I enjoy camping, cycling, canoeing, hunting, gardening, homebrewing, and pretty much any other outdoor activity with the family. We are big fans of college sports – particularly football, women’s basketball, and baseball. I’m a Minnesota Twins fan, and I have the goal of visiting each of the 30 major league baseball parks in my lifetime.